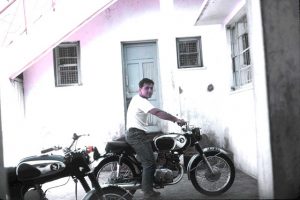 Paul Zalesky sent the news of John’s death and Tess Longhi sent the obituary John wrote for himself:

John Longhi was born in White Plains, New York, raised in Larchmont, New York, and lived most of his adult life in Hamden, Connecticut. Following his graduation from Notre Dame with a BS in geology, John entered the Peace Corps and served in Kenya for more than 2 years where he met and married Tess, a nurse volunteer, who had a smile that could light up a room. While in Kenya, John designed and supervised construction of rural water supplies. Upon returning to the USA, John and Tess moved to Cambridge, Massachusetts where Tess worked as a visiting nurse and gave birth to a baby girl, Sarah. Meanwhile, John earned a PhD in geology at Harvard. Post-doctoral fellowships at MIT and the University of Oregon followed next. Subsequently, John had a successful career as a research scientist especially at the Lamont-Doherty Earth Observatory of Columbia University, where he worked on increasing our understanding of the origin of the chemical variation in lavas on Earth, the Moon, and the meteorite parent bodies.

John’s career and life were shortened by advancing Parkinson disease. He will be remembered for his calm disposition and timely sense of humor. 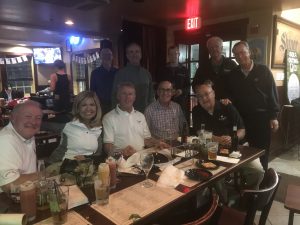 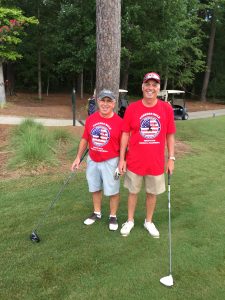 In attire obtained from Mike Burgener, Jim Hutchinson and Jerry Murray won the wardrobe competition during their summer golfing.

Meanwhile, in the back-at-the-office, workaday world category, Tom Corbett of St. Louis firm Thompson Coburn has been named one of the St. Louis, MO area’s Lawyers of the Year.  Tom’s practice concerns trusts and estates.

Rep. Jim Condon, who served seven terms in the House following a long career in radio broadcasting, has died after battling esophageal cancer. He was 60.

Condon, a “Blue Dog” Democrat, represented Colchester since winning election in 2004. He decided against running for re-election this year after receiving an “unwelcome medical diagnosis” of cancer this spring. He also served as executive director of the Vermont Association of Broadcasters.

He is survived by his wife, Ginny McGehee, a radio personality on WJOY in Burlington, and their son, Thomas, who attends Syracuse University.

“I have been humbled by the trust you’ve given me to be a voice for common sense at the Statehouse,” Condon said in April when he announced he would not run again. “I hope I have lived up to your trust.” He missed much of this year’s session.

Condon partnered with radio personality Louie Manno in Connecticut before they moved to Vermont where they worked in the 1980s and 1990s at several Burlington radio stations.

Their morning news and comedy program,“The Manno and Condon Show,” ran on WKDR-AM from 1990 to 2000. Prior to that, they co-hosted a morning show on WQCR-FM (now WOKO), where they broadcast their notable sketch, “Leave It to Bernie,” a light-hearted takeoff of the “Leave It to Beaver” television show that poked fun at Sen. Bernie Sanders (played by broadcaster Joel Najman).

Condon, the deep-voiced, hefty straight man in the comedy team, was known for his sharp wit and hearty laugh. In addition to partnering with Manno, Condon was also news director at WKDR and at WQCR/WJOY.

“I was the wrecking ball, and he did the layups,” Manno said Friday. “Of all the gifts Jim had, he had an incredible sense of humor. He always had a twinkle in his eye and I don’t know if anyone was ever angry with him. Jim was a very gentle man, an everyman who was just as comfortable talking to a homeless guy as a head of state.”

“We shared together several lifetimes worth of laughs,” said Manno, who held his best friend’s hand for the last time on Thursday. The two also ran a deli in Burlington together after they stopped broadcasting and before Condon ran for election to the House.

“He was the smartest and funniest man I ever knew,” said Dan Dubonnet, the general manager of Hall Communications, the parent company of WOKO and WJOY. McGehee, he said, was “in good spirits” and spending time with co-workers and friends at the station on Friday afternoon after completing her morning shift.

Condon passed away Thursday night at the McClure Miller Respite House in Colchester.

Condon served on the House Ways and Means Committee and had a reputation as a fiscal conservative. He described himself as a “Blue Dog” Democrat and made several efforts to reform and simplify the property tax system.

Gov. Phil Scott, who served five terms in the Senate, said he was sad to hear of Condon’s passing.

“I was fortunate to have the opportunity to work with Jim during my time in the Vermont Senate. He was truly an independent voice, always acting in the best interests of his constituents. Jim was eager to reach across the aisle and work together on important issues. His experience and wisdom on the House Ways and Means Committee was incredibly valuable.”

“Jim set a strong example for all his colleagues, and his years of service are appreciated. My thoughts and prayers are with his family during this difficult time,” the governor said.

Speaker Mitzi Johnson, D-South Hero, said: “I am deeply saddened to learn of the loss of a dear colleague and friend to all, Representative Jim Condon. Jim was a devoted public servant, fondly known for his booming voice and sense of humor, who represented his community of Colchester with great distinction.”

Ways and Means Chair, Rep Janet Ancel, D-Calais, said: “Jim had a huge heart. I will deeply miss his wit, intelligence, and friendship.”

In July, Condon and McGehee celebrated their 25th wedding anniversary when they traveled to Ireland, the home of Condon’s ancestors.

Condon grew up in New London, Connecticut, and graduated from the University of Connecticut. He served as press secretary for congressional candidate Jim Guest during part of his 1988 campaign.

No funeral is planned. Instead, a celebration of life ceremony will be held at some time in the future, Dubonnet said.