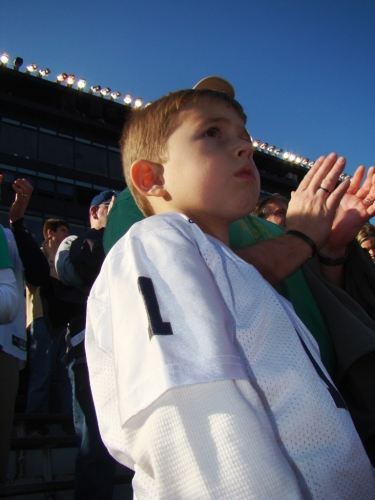 Congratulations to Coach Pete Farrell and his Princeton Lady Tigers, as they concluded their cross-country season with a 5th place finish at the NCAA Championships, matching their 5th place in 2008. Has Princeton ranked this high in any sport since the days of Bill Bradley?
Coach Farrell faces an unusual hurdle in getting these great results out of his team. While it's common for college students to bring academic material on road trips to sport competitions, the Princeton women insist on carrying a textbook to study _during_ the race.While Coach Farrel has been unable to stop this practice, he does count some small victories–he's banned them from bringing any art history texts to the starting line, and also yellow highlighting during the race (they were prone to veering off course, losing precious seconds, while marking up a particularly arresting passage).
Great job, Pete!
Ken

With their fresh good looks, intelligence, and warmth, the Toms made the sunny afternoon of the Navy game memorable for the quality of the party.  Class President Tom Weyer arrived early and was soon joined by other Tom notables: Tom McKenna (of Carmel, IN), who is likely to run for Secretary of State on the Democratic ticket; Thomas A. Durkin, Thomas S. Moore, Tom Gibbs, Tom Misch,  and Tom Cuggino.  There were some other people there, too, but they were not Toms, even though, like the rest of us, they spoke of cousin Tom McKenna in Chicago, Tom Condon in West Hartford, CT, Tom Fitzharris, the artist and television producer in New York, musician Tom Wishing, Tom Chema, Tom McCann of Oak Park, the quarterbacking of Tom Clements and so on.

Toms are the dragons’ teeth of the class of 1968: more than 90 of us plus the toe-in-the water variety who have T. , probably for “Thomas”, as a middle initial: John T. Fowler of Louisville; George T. Horn, who came from Columbia, PA; Richard T. Kelly of Chicago; Peter T. King of Jamaica, NY; John T. Kries of Dallas; Michael T. McGarry of Schenectady, NY; John T. Slankas of Lawrenceburg, TN; and Thomas P. Kingston, Jr. of Staten Island, NY.  Then there is T. David McGovern of Barrington, IL.  Imagine all the Toms – Tom Goodenow, Tom Gubanich, Tom Krull, Tom McDermott, Tom O’Reilly, Tom Spinrad and, of course, Tom Umphrey – all vying on the limited phone lines for the chance to talk with Mary Ellen, Mary Margaret, and Mary Clare each Friday at St. Mary’s.

Though they share many good attributes, the Toms are far from homogeneous.  Some are named for Thomas the Apostle, while others are named for Thomas Aquinas, Sir Thomas More, Thomas Jefferson, and maybe Tommy the Iceman.  Some you can stack like cordword: witness Tom Weyer, Tom Condon and Tom Gibbs in the melee of a 40th reunion alligator pile; others with the same name keep their sensible distance.

The name is so popular in the records of our class that those not named Tom are probably the younger sibling of an older brother who had already taken the prize.  The majority of the Toms in our class share another quality: they don’t send news for these records, though Tom Ferratt, it is true, signed his name on the attendance list at the Michigan State game.  In that way, the Toms are like the Mikes, Johns, Steves, Joes and Kevins in our ranks.

For the record, and witnessed by many of the Toms, Dave Kabat was at the tailgate before and after the game.  Also enjoying the company of the Toms were Jay Schwartz and Laura along with son-in-law Randy Cornett, Megan, and their son Owen, all visiting from Baltimore.  In the Schwartz group was Jim O’Donnell, another son-in-law, who came from Seattle for a get-together with his Carroll Hall friends. Nearby were Brian Schanning and Susan from Marblehead, MA when they are not on the open sea.  John Mulligan, who used to be under the sea with Brian during their Navy submarine days, came from Cleveland. South Bend dignitaries Chris Murphy, Gene Cavanaugh, Jim O’Rourke and Joe Kernan made the tailgate an afternoon stop. Bob Ptak, Roger Guerin, Bryan Dunigan, and Brian McManus were four who came from the Chicago area.  Jim Hutchinson brought his big (pre-game) smile from Rochester, NY.

Mike Baroody and Muff are awaiting the birth of their twenty-first grandchild.  Other grandfathers who will soon announce repeat business are John Walsh and Jay Schwartz.

Joe Blake, Mike Baroody, Bill Brennan, Monk Forness, Ed Kickham and I had fun discussing the draft and the U.S. Military forces on November 11th.  If you want to see the email, let me know.  Now that we have solved that problem, we will turn to new challenges: healthcare reform, economic stimulus, and the understanding of women.  Join in.